How to ride a skibob video from Brenter Snowbike

Brenter Snowbike, an Austrian skibob manufacturer, put together a short, precise, instructional video.  In the video they cover all the basics one needs to know when hitting the slopes.

Skibobbing really is this easy to learn.  I still recommend a short lesson when attempting for the first time.  Most resorts require lessons before they can be rented.

If your legs are sore at the end of the day, that probably means one used the foot skis for skiing.  Try lifting the foot skis off the snow periodically the next time out on the slopes.  They really are just for balance or just keeping your feet from dragging in the snow.

Email ThisBlogThis!Share to TwitterShare to FacebookShare to Pinterest
Labels: how to ride a skibob

Sports skills that transfer to skibiking 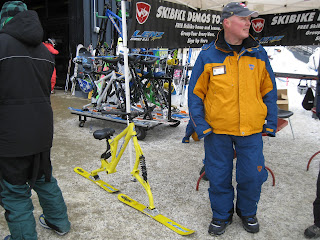 The best way to learn a new sport is to use movements that one already knows.  The same is true when learning to skibike.

After five seasons of teaching pegs, I think I have a handle on this.  Lessons I've taught this current season really hammer home this theory.

People with experience motorcycle dirt biking and downhill mountain biking pick things up the quickest.  They kinesthetically understand the bike movements and handlebar tilt.  They use the same athletic stance too.

I've had quite a number of teenage boys and men in their 40's to mid-50's who are experienced in both sports pick things up in 45 minutes or less.  Experience on snow is not a factor.  Some of my best learners were from Austin, Dallas, Houston, and other non-snow states in the USA.

There are exceptions though. This past Sunday, I had two adults in their mid-20's to 30's.  The male guest was from Austin and a self-admitted poor skier.  The female guest said she failed at snowboarding and the chairlift really scared her.  Both were looking for an alternative snowsport.

After 45 minutes of coaching them (class size of 2 people, peg bikes), they were making beginning linked skidded turns on a green run.  Neither had fallen.  Fear of the chairlift was a thing of the past - both detachable and fixed-grip lift procedures were taught.

We then moved on to a bit more challenging terrain with more of a pitch.  There were a few falls as they adjusted their technique.  At the end of the lesson, they received their skibike licenses.  They went on to rent the bikes for the rest of the day.  Both had found their snowsport.

Skiers and snowboarders bring some skills to the lesson too.  An expert understands edge angle, stance,  and the basics of turning.  These same concepts are addressed in a lesson by a trained knowledgeable instructor.  It might take the skier or snowboarder from 2-3 hours to grasp all the basic bike movements though.

Those who play sports, really almost any sport, will have balance skills.  They also come into play.  Those without balance tend to struggle on peg bikes.

Not everyone will admit to a disability.  Diseases and injuries can cause challenges.  I often recommend skibobs to those with balance issues.  There are specific adaptive skibike programs like the one at the National Sports Center for the Disabled in Winter Park, Colorado.

If one decides to take a lesson, speak up.  Let the instructor know what sports you play.  They can then do skills transfer analysis and get you going quicker.  This applies to skiing and snowboarding too.

Skidded turns and skidded traverses on a peg ski bike

One of the biggest challenges to a first time peg skibiker is producing a skidded traverse.  One must tilt the handlebars downhill so the skis will have a low edge angle to the snow.  It's counter-intuitive to how one would normally ride a bicycle.

Most first timers want to lean into the hill which gets the skis up on a carve.  The rider will then find themselves unable to control their speed or stop the bike.  This a bad place to be for a beginner.

Most think they are tilting the handlebars enough downhill to produce the skid.  90% of guests are incorrect with this assumption.

A dead giveaway is the tracks that the skibike is leaving in the snow.  A carve is going to produce a narrow track in the snow with obvious force on the uphill edge of the track.

A skidded traverse or skidded turn will produce a wider more schmeary track in the snow due to the low edge angle.

By tilting the handlebars down, one flattens the skis and have more surface area contacting the snow.  This is what it should look like.

When making a skidded turn, it's important not to lean the skis into a carve.  Keep the skis almost flat during the turn.  Use very little edge during the entire edge change.

Practice performing skidded traverses and then move on to skidded garlands before moving onto skidded turns.  Use wide gentle terrain that is uncrowded.  Find the terrain the ski school uses to teach snowboarding on and use that if possible.

Skidding is important to beginner and expert riders.  It's the technique that allows the rider to dump speed in almost any situation.  For the expert, it's handy in the bumps.

Email ThisBlogThis!Share to TwitterShare to FacebookShare to Pinterest
Labels: how to control speed on skibike, how to stop on skibike, skidded skibike traverse
Location: Winter Park, CO 80482, USA

Patrick Neelan, the USA distributor for Stalmach skibobs, visited Sipapu Ski and Summer Resort in New Mexico, USA during the annual skibike festival there.  While there, he held a skibob instructional clinic for the staff.

While this video is meant for the Sipapu staff, one can still pick up some basic techniques - how to fit the foot-skis to ski boots, loading/unloading from the chairlift, stance, sideslipping, and stopping.

Whether one is one a skibobber or pegger, one controls their speed through edge angle and performing turns.  Sideslipping or skidded traverses, with their low edge angles, are the most basic techniques of keeping one's speed in check.

Notice how Patrick is showing the instructors how to skid the back end of the bike around at the end of the turn.  Swing the back end around quick enough and one can perform a hockey stop just like on skis.

Skidded traverses, where the student goes across the hill with the ski bases almost flat to the fall line, are where beginners will really learn how to control their speed.   It's the most basic maneuver that every new skibiker should learn first in a lesson.  Without it, peggers will find it very difficult to stop.

Think how you would create muscle memory in your students on their choice of bike.  It's critical for their success.

The instructor only receives about $5 in wages of the money you pay at the lesson desk. They do not receive a percentage of the lesson cost.

If you or your child has a fun lesson, learn something, and get individual attention - the proper etiquette is to tip your instructor. $5-10 is typical for a group lesson while a private lesson is $50+.

© 2016 G. Kunkel and Professional Skibike Instruction. Unauthorized use and/or duplication of this material without express and written permission from this blog’s author and/or owner is strictly prohibited. Excerpts and links may be used, provided that full and clear credit is given to G. Kunkel and Professional Skibike Instruction with appropriate and specific direction to the original content.